by the Rev. Bob Olsen

A couple of weeks ago, during his sermon, Fr Ray noted his Mazda MX-5 had been backed into by a neighbor. Having his “baby” dinged up was disconcerting and that it took some time for him to remember things are things and it is our relationship with God and others that is important. I apologize in advance if I’ve misquoted his sermon. While he didn’t quote Matthew or Luke – “where your treasure is, there your heart will be also,” it got me to thinking about the things in my life and their “importance.” Now we named our little red sportscar Ralphie, after the main character in “A Christmas Story” as I mentioned to Sandy the evening we got the car I might not be able to tuck the car under my pillow as Ralphie did his Red Rider BB-Gun, I could snuggle up to the owner’s manual. Anyway, about three months after we bought Ralphie, a fellow backed into me in a parking lot. Needless to say, I was upset that my almost brand-new baby had been damaged. However, I discovered it was hard to stay angry when describing how our car was hit by a boat. Oh, the guy who backed into us was towing a boat and the prop put a gash in the front of the car. No one was hurt, the car was drivable, could be fixed and while Ralphie was my baby, it was still just a car.

Over the years I’ve had other vehicles hit – our ‘59 Triumph TR3 (Sandy’s car when we got married) by a fellow in a hurry to get to the police station to apply to be a policeman. I still wonder how that interview went. Or when Sandy told me our brand-new 1971 Toyota Station Wagon had been hit by a Columbus Georgia garbage truck, the image in my mind was a crumpled heap of blue metal. No one was hurt, our little car was drivable with just a little dent in the rear fender and the City owned up to the accident. When telling people our car was hit by a garbage truck – not your everyday occurrence, I couldn’t help but chuckle.

Being a California boy coming of age (meaning 16) in the 60’s meant cars and driving has played a big part in my life. However, among the good qualities I learned from my dad, I keep cars for at least 10 years or 100,000 miles and maybe a bit longer. As such, regardless of naming them, or going to sleep with the owner’s manual under my pillow, they have always been simply transportation. I think that has helped me keep “things” in perspective, there is nothing I own that I couldn’t do without, not so for the people in my life.

So this article doesn’t become a book, I’ll mention just two. Even though Biblical Archaeology Digest is the last of the magazines I’m getting for Fr Zea, I still think of him often as he saw the good in everyone. He loved God and all of his neighbors, even some that I thought of as “difficult.” Fr Bob Gould had much that same quality, a gentle soul whose greeting and good bye always include “love”. I pray that I and all of us can follow their example.

by the Rev. Raymond Hess

As we celebrate Independence Day in our nation, it is helpful to remember that the Episcopal Church is organized in a very similar way to our country. This was no accident; many of the people who designed the structure of our new nation in the late 1700s were members of the new Episcopal Church, such as George Washington, Thomas Jefferson, and Ben Franklin. Their desire was to form a church that was governed by its people. This is what happened!

The Episcopal Church is set up as a representative democracy, where people at the parish level elect leaders to represent them. Each parish has an Annual Meeting where members of the vestry (the church board) are elected by parishioners. The Annual Meeting also elects delegates to the Diocesan Convention, which makes decisions for the diocese. Our St. George’s delegates for 2018 are Sandra Crenshaw, Aaron Adkins, and Becky Freie. Alternates are Mel Rose and Deb Hess. The Diocesan Convention meets once a year, and this year will be at the Redding Civic Center in Redding on November 9-10.

In the Episcopal Church, our bishops are elected by the people, not appointed from on high. Bishop Beisner will be retiring in June of 2019. A profile of our diocese has been created for prospective candidates, and a nominating committee has been formed. The nominating committee will present a slate of candidates to our diocese later this year. On February 9, 2019, there will be a special Electing Convention of our diocese at Trinity Cathedral. Those who are current diocesan delegates will vote to elect our new bishop. The new bishop will be consecrated at a service on June 29, 2019.
As you can see, our Episcopal Church is set up as a representative democracy, where power comes from people in local congregations. As with our nation, the whole structure depends on active, informed people who get involved in our church’s life. Please keep our representatives and our church governance in your prayers for God’s guidance.

by the Rev. Ray Hess

On May 20th, we will celebrate the third major feast day of the church year – the Day of
Pentecost. This is least known of the major feast days. Christmas and Easter are very well known, but many people have no idea about the meaning of Pentecost.

The Day of Pentecost is about the coming of the Holy Spirit upon the early followers of Jesus. According to the author of Luke and Acts, the disciples were in Jerusalem on the Jewish holiday of Pentecost, a spring harvest festival that is fifty days after Passover. As the disciples gathered together, there was a rush of wind that filled the house, tongues of fire rested on each of them, and the disciples were filled with the Holy Spirit. They were able to praise God in various other languages. People gathered around the house could hear them speaking in the native language of each one.

Pentecost is often called the birthday of the Church. The coming of the Spirit empowered the first disciples to do the mission of Jesus – to preach, teach, and heal as Jesus did in his ministry. The presence of the Holy Spirit is described in various ways in the New Testament. The common meaning is that God is present and active in our lives, not far off in a distant way, but within us in a very personal, intimate way. The Holy Spirit knows no boundaries. People in all cultures and nations can know God’s presence through the Spirit.

Pentecost Sunday is a powerful reminder to us at St. George’s that God is present with us, both as a Christian community and individually. The power and guidance of God is available to each of us.

It makes all the difference for us as a parish to be open to the guidance, love, and power of the Holy Spirit.

I wish us all a powerful experience of the Spirit this Pentecost!

by the Rev. Bob Olsen

Pentecost Sunday is coming up on May 20th, please remember to wear red that day, as a symbol of the fire of the Holy Spirit.

Also, on that day at the end of the Gospel, I am looking for volunteers to say John 3:16 in different languages all at the same time, similar to that reported in Acts when the disciples spoke in languages that all could understand.

For God so loved the world, that He gave His only begotten Son, that whoever believes in Him shall not perish, but have eternal life.

We will be doing this at both services so please let me know if you’d like to participate, at which service and in what language.

Dear Friends in Christ:
Our long pilgrimage of Lent now comes to its conclusion, taking us through the powerful, ancient liturgies of Holy Week, to the great goal of Easter. Lent has been all about getting ready for Easter; now Easter comes, and begs the question, “What next?”
St. Mark’s version of the Easter story likewise leaves us in mid-air. The tomb is empty; the message is clear; but there is no appearance of the risen Jesus. He has gone on ahead, we are told. If we want to see him, we must follow him. We must make the journey where he has led the way. Our pilgrimage continues, from strength to strength, from glory to glory.
May God bless and sustain you in that journey, in the power of the Resurrection. May we faithfully follow him and show the world his way of peace.
Yours in the Risen Christ,
+Barry

At St. George’s we have a tradition of Flowering the Cross for Easter.  This is an ancient tradition among Christians.  As worshipers bring beautiful, live, fragrant flowers to adorn the cross, eventually the cross becomes covered in a brilliant array of color, light and lovely fragrance. A symbol of death, darkness, pain and hopelessness is transformed into something beautiful, new and alive in celebration of the Resurrection of Christ. Together, we can transform the cross and help make this Easter a celebration of new life.

We look forward once more to the Flowering the Cross on Easter Sunday, April 21 at both the 9:00 am and 10:30 am services.

Please bring any flowers that day that you have to share in this beautiful tradition.  All members of the congregation will be invited to participate in decorating the cross on Easter as a part of the service. 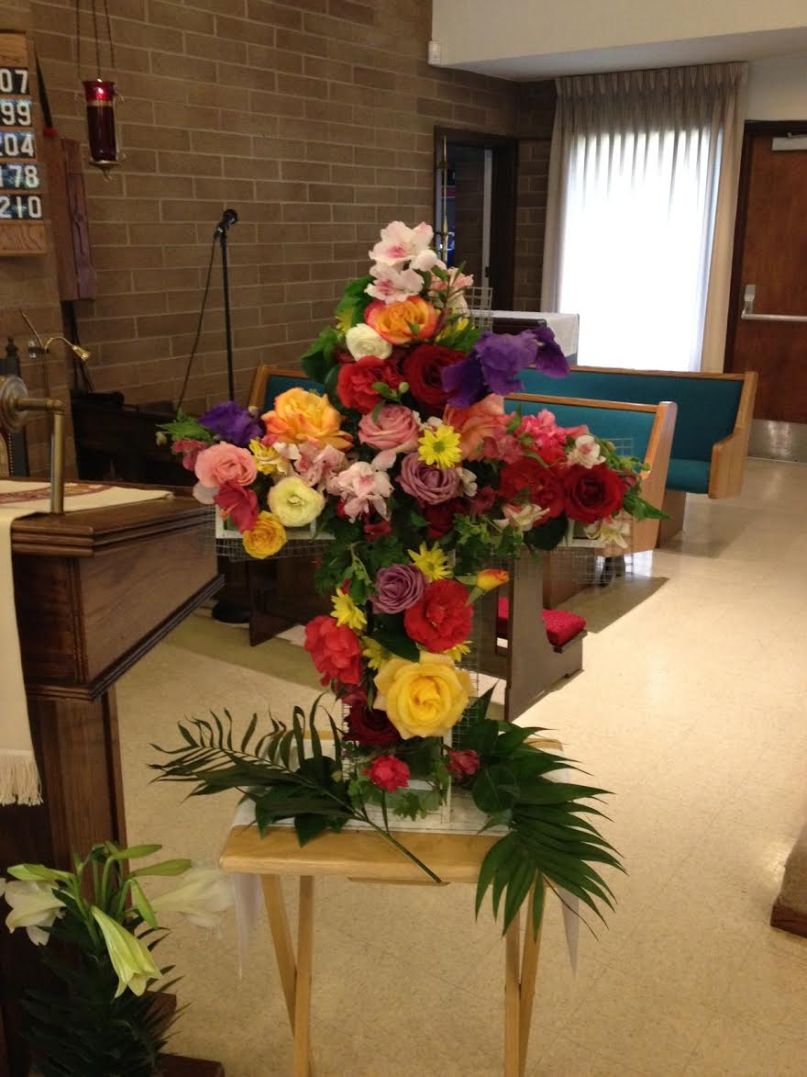 The Great Vigil takes place on Easter Eve. It begins with the church in darkness, like the darkness of Jesus’ tomb. Then candles are lit, representing the Light of Christ which overcomes death and all darkness. A beautiful prayer about the Light of Christ is said or sung. Then there is a series of readings from the Hebrew Scripture about the work of God through history, leading to the coming of Jesus. After this, the first Eucharist of Easter begins, with baptisms (if there are people to be baptized). At the conclusion of the service, there is usually a wonderful fellowship time.

The Great Vigil goes back to the early church, when the Vigil started on Easter Eve and continued to Easter Morning. We do the short version!

In our congregation, we have been rotating the Vigil among local churches. In 2019, we will be visiting Lutheran Church of Our Redeemer. Please come join in one of the glorious liturgies of the Church Year!

dragonstails
Create a free website or blog at WordPress.com.